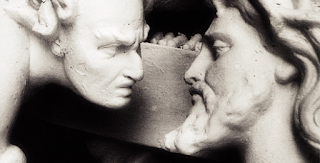 Again the meeting of the nosers had a surprising intervention. As it is usual one of the members gives a speech related to the nose in any possible way. The new member used the Spanish expression "tener narices"  an equivalent to "have the guts" to introduce his speech:

... In a time where internet is creating in a way a society where uniformity is growing across the world and opposition is practically banned or silenced is good to remember that not all we were told must have been so. Yes we know it, and this since the beginning. Who says that even the Bible does not tell only the light version of what happened? And if Satan would have been the accuser of God instead of being a fallen angel? He could have had the guts to do it and lose the battle, or even be only part of the plan to save souls. Just let's imagine what could be the same story seen from the other side.

What do we have? A God that is there since the beginning of eternity. A God that is alone all the time... and is unsatisfied. Yes unsatisfied or He wouldn't have created the universe. Being all OK why bother in doing it? If He felt the need, had the wish to do it ... something was not perfect. So we have an unsatisfied God that most probably doesn't even know where He is coming from, in an imperfect situation that experiments creating, first company (the angels) and after this starts with the universe, Earth, humanity. An experiment that fails. He is obliged to kill all humans and start again. To understand what He created god sent the angels, the observers, to Earth and here is where we have the point. What did they see? Imperfection, suffering, disorientation, unfinished work compared to what they knew the Lord could do and had already done. Some of the angels, now observers, were terrified and helped humanity but this offended Him. His work could not be criticized!

But it was not only this what they saw, not all of them but some and specially one among them, the most independent of all of them: Satan. He saw the same as the other angels and saw also that God had given life to matter that transformed into souls, individuals that didn't die completely and suffered all the eternity prisoners of  the darkness, being able only to communicate with the beloved relatives under very special conditions. It was not only suffering in life, it was eternal torment.

Satan took the bit in his hands and leaded the revolt against his master based on deception. The deception of seeing that being able to create perfection He chose to play and infringe suffering, showing himself as a sever vindictive creator. Satan accused God in front of all angels and God created  heaven and the gehenna where Satan could reign over the souls that disobeyed His rules. Since them Satan has declared war against God. Consequence... Hell is not the place to torment souls but the place were souls prepare to a bigger revolt against God. When the devil takes people away from the laws of god is not to offer them pleasure and pay with the soul, what he does is take souls away from heaven, isolate God and avoid suffering to the souls, because all who follow His laws will suffer and be punished. In life and after.

There is more about this, because you can object that God knows all before it happens and God is love and love would not permit the souls to suffer all eternity, but also God is justice. Some books (among them the written by the devil Memnoch) speak about the secret deal between Satan and God, all souls in hell would just only learn what they did bad and once they understood would be transferred to heaven. As both popes, Johannes Paulus II and Benedictus XVI, explained hell and purgatory don't exist, are only an inner state of the souls where spirits understand creation and become ready to realize the concept of God, heaven and life.

In any case is a possibility, Satan accused the Lord, lost and made (or not) a deal. Or was the only of the angels that had the guts to accuse God and was condemned?