Napoleon didn't exist, is only a myth. 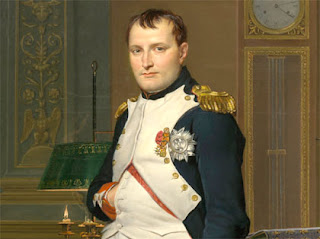 Your entire life is an illusion: New test backs up theory that the world doesn’t exist until we look at it:

Now, physicists at the Australian National University have found further evidence for the illusory nature of reality. They recreated the John Wheeler’s delayed-choice experiment and confirmed that reality doesn’t exist until it is measured, at least on the atomic scale.

Metaphysical solipsism: is the strongest variety of solipsism. Based on a philosophy of subjective idealism, metaphysical solipsism maintain that the self is the only existing reality and that all other reality, including the external world and other persons, are representations of that self, and have no independent existence.

When Socrates 2400 years ago stated his famous "I know that I know nothing" he didn't really know how right he was. We know each time less. Some actual experiments show that reality is created when observed, that the past behavior of particles can change based on what we see. So the past can be past or only a myth. Would be then strange that in 1000 years Napoleon is seen as non existing and only one more of the myths related to the sun? In fact we know it already but is nicer to believe Napoleon existed really.

Let's see:
.- His name was Napoleon Bonaparte
.- Was born in an island of the Mediterranean Sea
.- Mother's name was Laetitia
.- Had 3 sisters and 4 brothers, 3 of them were kings
.- Finished one revolution
.- Had 16 Field Marshals, 12 in active service
.- Was glorious in the south and succumbed in the north
.- After 12 years ended in the western seas.

1.- Poets (and not only) call the sun Apollo (in French Apollon). Apollo is the same as Apolleon and derives from the Greek verbs apollou / paoleo  that mean, kill, lose, exterminate.  Is clear that Napoleon "killed" "exterminated" people in his wars. Note the complete similarity between Apolleon and Napoleon, the difference is the "N", but this is again Greek where ne, nei is one of the biggest affirmations. This means that we would speak about the real, the important, the true Apolleon, the true Sun.

What about the family name? Bonaparte. Means good part- He is the good part. Something related with the sun has two parts ... what? the day, light and darkness; darkness that disappears when the sun is present. What do we have? The true sun that illuminates, that is the good part of the day, that kills darkness and enemies.

2.- Napoleon, like Apollo was born in an island. Corsica, close to France like Delos was also close to Greece. Pausanias tells that Apollo was in fact a Egyptian god (born out of Egypt and adored there as such). Napoleon was also considered as a special man, friend of Muhammad the prophet and was even adored in some places.

3.- Mother's name was Laetitia, that means joy, but is clear that under this name is referred the sunrise, the joy of the day. Leto was the name of Apollo's mother, converted into Letona by the Romans. The name evolved to Laetitia. Leto gave birth to Apollo and disappeared practically after. Also the sunrise vanishes when Apollo grows and Napoleon overshadows the mother.

4.- Napoleon had 3 sisters and Apollo also: the Kharites (Charites or Graces) daughters of Zeus.

Seems that we find too many parallelisms to be just a mere coincidence, no? Let's continue ...

7.- The 12 Field Marshals of Napoleon are clearly a reference to the 12 signs from the Zodiac and the 4 inactive are the 4 cardinal points that observe the movement of the other 12.

8.- Napoleon was winning in the South, had problems in the North. This happens also with the sun that covers well the South but has to withdraw from the North for some months.

It is clear we have taken as history part of the mythology. All describes only the sun moving around the earth as it was thought in ancient times!

It is evident: reality doesn't exist, we create / invent reality when we look to what we observe. And if reality does not exist and we create all when we observe, then is clear that napoleon existed or not depending you read this text or not. And if you do... you may modify the past and can be this text was created only for your eyes... or not.