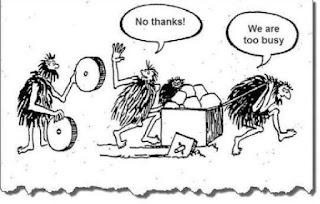 Definition of stupid:
1a:  slow of mind :  obtuse :  given to unintelligent decisions or acts :  acting in an unintelligent or careless manner :  lacking intelligence or reason :  brutish
2:  dulled in feeling or sensation :  torpid <still stupid from the sedative>
3:  marked by or resulting from unreasoned thinking or acting.  Senseless  > a stupid decision>
4:  lacking interest or point <a stupid event>,  vexatious, exasperating <the stupid car won't start>
(Merriam-Webster Dictionary)

The last meeting of the nosers' club was dealing with the fact that in society we seem to see more and more acts and facts that we not only don't understand but believe to be rather stupid. To understand a bit why it is more and more common to find stupid actions in our normal life, the speaker introduced us to the GFS disease. An illness that affects evolved societies that have not the urgent need to survive at short term. There is a cure to GFS (Global Functional Stupidity) but history shows a worrying 90% of mortality once it is epidemic. This was the speech:

Attributed to Mark Twain is the saying: Never argue with stupid people, they will only drag you down to their level and then beat you with experience. It is a reality, and has a lot of common places with other situations like in the family, in business and in social relations.

Not all the people are equally interested in all aspects of life. There are people that are more prone to sport and other to mental activity (to take two extremes). In general, society is a mixture of all possibilities and, as humans tend to be gregarious, a middle point is considered as comfortable for the “normal” communication. Very often a person that is focused one specific item and speaks long about it is seen as a bore or tiresome … and left alone with his thoughts and work. Sometimes highly skilled people have to cope with others that are not understanding (or won’t understand) and insist on keeping an “equal basis dialog”. In these moments the tendency of the skilled people to lower the level and argue is a normal reaction, as the human need of agreeable social relations must be kept to survive and cooperate. What happens is that we tend then to be nice, not to say all we know and with a smile enter into a “wait and see” situation.

This occurs in families, in work and when socializing. What do we do? We do our work, we comply with our obligations, we abandon the idea of convincing others, we do not think on what we do on a broader basis… If smart people are encouraged to not think and reflect at work we speak about functional stupidity. It can be due to the wish not to disagree with the boss or with colleagues or just to be nice. It can be catastrophic, lead to the point of destroying the company or incur in heavy disasters. One of the short-term benefits of this situation is that as it is much more comfortable and easy, it does not generate stress or conflict in the company and all answers are already known. No need to think alone and on top the group supports the action. We are so conditioned to think and act in a certain way, that to have own ideas or elaborate thoughts is revolutionary. There are countless commonplace examples of businesses accepting and encouraging functional stupidity within their organization; from unsustainable management fads to an over-reliance on brand and image. An example can be executives who are more interested in great power point shows than systematic analysis or schools focused more on developing impressive strategies than educating students, or technology firms that are more interest in keeping a positive tone than addressing real problems. A dose of functional stupidity can be useful and produce good, short-term results: it can nurture harmony, encourage people to get on with the job and drive success. But what effectively happens is that at the end what is lost are vision, motivation, talent and skills, not to speak about the group’s rupture.

Is incredible that smart firms with intelligent people do such stupid things. Often they hire smart people and then encourage them not to use their intelligence. The smart people will naturally think for themselves and ask questions. But this is discouraged in subtle and not so subtle ways. Employees are told things like 'don't think about it, just do it', and 'don't bring us problems, just bring us solutions'. The smart workers quickly learn not to ask too many questions or to think too deeply because fully using their intelligence will result in awkward questions that might upset their superiors as well as their co-workers. The easiest course of action is just to get on with the job.

The point but, is that this is not only happening in business, is a common transverse-social problem. It happens in families, educational boards, not to say political parties and situations. When we have a family where the parents have arrived to be in a functional stupidity position, we will see a nice happy family from the outside. But when looking closer we find parents not encouraging children to question items, not to think too much (better a TV or any game than think) or push to be “equal to the others” creating a false sense of group. Who tells don’t use facebook/twitter or similar? On the contrary, policy is to open an account to “watch and control” (?) and show how cool we are that we share it with the children. Immediate benefits are clear. Not using intellect avoids questions, makes life easier and apparently happier.

However, this may create big problems in the long term. To overlook problems, choose easy solutions and just come with the first idea to solve a situation leads to a disaster because not all was done what could have been done. And then who is considered guilty? Never the person, never the company or the family… guilty is the society that leads us to these points of stupid result. We have seen it in baking, in IT companies, in families that are unstructured and have complicated relations with youngsters, in schools that don’t know how to redress the situation with violent or unmotivated students. But who forms society? WE!

The solution when it is too late to solve seems to prevent future cases, to make new laws, procedures and regulations. Useless remedies that will only encourage people to think less and do worse. But we can prevent it: Organisations can encourage an environment of reflection by building ‘challenge’ into thought processes coming up with questions, not solutions. Organizations can harness theirs employees’ skepticism to get rid of pointless initiatives; for instance, identifying and disposing of empty management speak, which wastes people’s time and achieves little. Quality of work, co-responsibility, integrity, honesty … needed values to solve the problem. Parents have to be educated in a view of what society will be in the future, have to be re-adapted in views like the teachers have to do. To stay with old concepts means to insufflate values that are no more useful not only to survive but also to be productive in society and build the needed personality. In our hands to solve it or not.

The session was very active and most of the interventions showed that we all know many cases of infected entities. The need to act seems urgent.