Society without lies: Ideal or damnation? 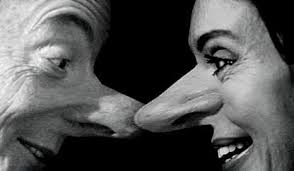 One of the good moments of every month is the meeting of the circle, now (all must be said) much comfortable than before but less delicious in gastronomy. Unfortunately not all is possible!

The actual political confrontation in which all leaders say that in the other party all they tell are lies brought us to select this item as subject of the month. Can indeed exist a society without lies? Is it an ideal or on the contrary something to be avoided? We all waited to hear the provoking opening by our speaker that started ... provoking!

-- Dear fellows, when I see you here disposed to discuss about the social lies or even if a society could exist without lies, I ask myself if you don't have anything better to do. Probably not. Probably you are not well at home and need to go out due to either the family situation, or loneliness or just come here to show how smart you are. Better would be if stayed at home or put your energy in working for the community.

-- Did you like it? I don't think so. We are not used to hear so direct and clear opinions from strangers and even from friends. It hurts and offends. But why?
Is easy, we don't want to be unpolite and prefer to mask our real feelings and thoughts. It makes us if not loved at least accepted by the other. We all have to admit that we prefer to be liked than disliked. Being accepted is our utmost desire as alone we know we are not able to do anything at all. To survive we need the others. Many among you are businessmen (and by this I include women also) and have dealt with oriental partners. You know the frustration when after a long time of exposing your arguments and with a constant nodding of the partner you believe all is gained and when you arrive to the final point and just for politeness ask if all is OK they tell you NO. Their culture doesn't allow them they disagree. The nodding was just a mere I follow your reasoning, and not an I agree with you. But even knowing this, that we don't want to be unpolite or as said before we need to be accepted we ask the others to tell the truth in all moments.

This is not a psychological master class so I won't enter into details but we ask people to tell us the truth even in the moments we know they won't just to be sure, to dominate the situation and not feel walking on thin ice or swamp terrain as you prefer. From one side we don't tell the truth if it affects people's concept of us and from the other we ask them to act as we don't. So, what do we want, what do we do?

In society is well seen that some minor lies are said to avoid stupid quarreling or even because we don't even care about the other. Is there anything more stupid that the answer to the formal "How do you do?" is exactly the same? Try to explain you don't do well ... and see the face of the other. So we all agree small stupid lies are accepted. Question is where is the limit of the small lie and when is not accepted to say even half of the truth.

We often hope for a society without mental boundaries, a society that is franc, open and where truth is always present and a must; even in the small stupid cases. Truth without exception. The Arab proverb: If what you are going to say is not better than silence, don't say it, taken to the extreme. There are two other forms of the same idea: Better be kings of our silence than slaves of our words and If you don't have anything positive to say about someone, then keep silent. In fact it is the known triple filter attributed to Socrates that summarizes all this: Is true what you tell? Is it positive? Is it useful? If we would apply this filters, most of the time we would be silent, as we speak and express our ideas without having confronted them to reality or consequences they may have. We just speak to be listened and fill emptiness, not to say something where we could show us to the others. And still we wish and dream a society of pure truth.

How would this society be? In constant war among us? Filled with long silences? It would disappear and return to the actual state. The reality is that this society may exist and not only survive, but develop us faster, there are only two "small" drawbacks to it or even only one: WE have to change. WE have to learn to work together, to cooperate. WE have to learn to be positive in all, in our views and common behavior. WE have to learn to show and feel interest for the others, and this we can get only with two elements: education as members of a group called humanity and personal opening towards the others, even if it hurts at the beginning. It is in our hands. As long as social lies are accepted our society will be a lie and we also, not only what we say, what we are. Up to us.

There was a long discussion after, some said that the truth kills more than any weapon, some opposed that the truth liberates of social slavery. Up to each of us to work in benefit of a better society ... as each of us understands it.