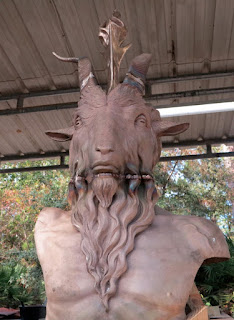 
The King called me again as he had a bad dream, or better said, a nightmare that showed his kingdom devastated by devils that were modifying the mores of his citizens. In his royal dream the devils hold a kind of sabbath in which they worshiped what reminded Moses' Tablets of the Law. He tried to read what it was written in the tablets but he only saw what could be the title on one of them in golden letters: Commandments to wreck society. In this moment he woke up shivering and sent for me. He asked me about the hidden part of the dream: the content of the tablets.

-- I'm only a poor buffoon,  Majesty and have not the capacity to interpret dreams, but I can tell what I see on the streets of the kingdom. You have seen yourself that in your realm to be educated and show respect to the other is seen as being if not stupid at least archaic. Is clear that the devils were spreading the good news of the existence of the Global Law of the New Order with its new commandments to wreck society and create chaos or what is worse to destroy your kingdom and all other countries.

As for the laws to arrive to the promised paradise of full egoism and disdain towards all the rest, is not necessary to do the contrary of what was before considered a social value. Don'rt raise the eyebrow Majesty, killing is still seen as going against society and is still a sin. The new God is called EGO and his three servants are the acolytes "I'm worth of it", "Only present counts" and  "Is not my problem".

I have not seen the tablets of the law Majesty, but I can bet that the new laws are clear and will be well accepted by the mass. Concepts easy to apply and to remember:

First:      Be over all the rest, no matter who nor when.
Second:  The mere fact of existing implies the right to be rich without effort.
Third:     Use any kind of violence as the normal way to get what you want.
Fourth:   Business don't need to have ethics.
Fifth:      Live as if you would going to die tomorrow, have all pleasure now.
Sixth:     Never forgive and act fast on the weak points you see.
Seventh: Money is the instrument of power, take it no matter from where.
Eighth:    Science is to be used without any kind of moral barriers.
Ninth:     Don't get into politics, use politicians and influence them.
Tenth:     Use the emotions to move people and get all what you want

The devils are the actual movements in society, derived from the improvement of welfare in your kingdom and lack of care for the future. Prosperity, even following a sine wave, creates the bad habit of not thinking that the future can be bad. Technological prosperity is a bitter enemy of mores and personal development. The inversion of values has a strong implementation in society and can be only fought with a generous vision of education for the future since the very early stages of education.

-- And till then, till the actual boys and girls grow and arrive to be mature citizens?

-- Majesty, this is the dilemma, either you resist and select well your ministers that implement the solution or "nwoke o bula maka onwe ya", what in Igbo would mean every man fights for himself or no trace will be left from your realm.

Again the king looked at me sad, but this time he knew what to do to avoid the duck out of stable values.